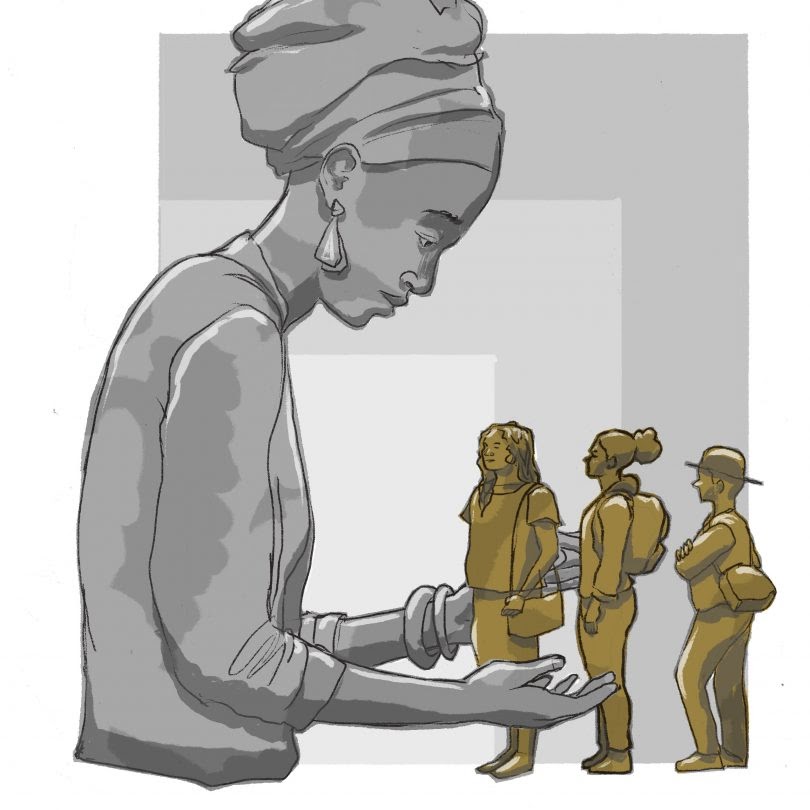 “Why am I the only brown one?”

According to my mother, my four-year-old self asked her this question one day after coming home from nursery school. Unbeknownst to me at the time, I was already beginning to navigate the complexities of cultural and ethnic identity in America, existing as both insider and outsider, moving in and out of black and white worlds.

Decades later, as both a designer and an educator, I continually find myself asking the same question. I may or may not choose to speak my sentiments aloud in a given moment, but those words—or some variation of them—hover on the tip of my tongue: “Why am I the only brown/black one?”

Like many other designers in the United States, my identity as a creative professional has been primarily shaped by the Swiss Style/International Typographic Style tradition. As a result of the Bauhaus’ broad influence on design curriculum in the US—the model of “abstraction and experimentation” for learning universal design principles became the standard for design curriculum (McCoy, 5–7)—I know that what I absorbed and subsequently embodied in my work ties me to an entire community of designers across the design universe. And my aesthetic preferences are indelibly linked to a Swiss Style tradition.

As much as I appreciate the myriad ways in which my design education has served me, however, pursuing a career in the field has been a strange and lonely odyssey. The phenomenon of simultaneously feeling like an insider and outsider among the circles/worlds I inhabit has stayed with me.

Despite everything I have gained through formal education and professional connections, I am aware of how much I have to discover about the history, stories, and work of non-European designers whose contributions have been systematically eclipsed in favor of the European greats.

A few decades before Walter Gropius founded the Bauhaus, for example, noted sociologist, historian, civil rights activist, and author W.E.B. Du Bois was developing “Hand-drawn Infographics of African-American Life” (Miller). I learned about this only a few years into my tenure-track teaching position in higher education.

To be a Black designer who knows relatively little about the work of other Black designers is an embarrassing admission, but it also reflects the limitations I encountered: a path to design punctuated by frustration. I experience an ongoing need to understand my experience, as well as the experiences of other designers of color.

During graduate school, my independent pursuit of learning, understanding, and discovering how and where African Americans fit into the history of design and advertising led me to a distressingly eye-opening examination of negative Black lack caricatures. Throughout the research process, I found myself posting favorite photographs of my Black relatives in my graduate studio space to combat the ugliness of grotesque imagery I was confronting daily.

A photo of the author’s mother and father that hangs in her workspace.

However, no matter how much they upset me, I could not bring myself to look away from the dehumanizing images. They reminded me of the importance of the profession I had committed myself to: though negative caricatures and stereotypes do not define the profession as a whole or invalidate all of the good that design is and does, they remain a testament to the ways in which a full, inclusive design history has yet to become the new standard for design education.

I was fortunate to be part of a graduate program that wholeheartedly supported me, but there were still many moments when being “the only brown one” yet again created a sense of detachment. Part, and also apart. Insider, outsider.

When I finally came across the late Sylvia Harris’ seminal 1998 essay, Searching for a Black Aesthetic in American Graphic Design, I felt as though I was being seen for the first time. She spoke to my experience when she wrote,

“Black designers are working at a disadvantage when they do not feel a kinship with existing design traditions and also have no evidence of an alternative African or African-American design tradition upon which to base their work.”

What I need from design culture

From a technological standpoint, design is accessible to a wide audience. The democratization of our field through advancements in technology and a profusion of online communities and resources has made it easier than ever for the average person to learn the tools of the trade. And yet, participating in the design community is much less accessible.

Whereas technology can fill in knowledge gaps and connect people with similar interests, it cannot make design spaces inclusive or demand more diverse representation in our ranks. A predominantly white profession since its inception, design continues to exist as a space in which European influence remains the primary standard by which “good” design is measured.

I see distinct parallels between my transformation into a graphic designer and my cultural, racial, and religious identity formation. In both cases, time, education, and experience led to greater perspective, insight, and understanding. However, the foundation of my identity is based on full awareness of my family history and its diversity.

In consideration of both my Swiss Mennonite ancestors who fled to America to escape religious persecution and my African ancestors who were enslaved and brought to America in chains, I have always viewed my background with a sense of rootedness and pride. My ancestry and family relationships have shaped me, helping to temper the reality of prejudice and intolerance.

Similarly, design, for me, is a mix of all the best and worst parts of my collective experiences. The frustrations are offset by the opportunities to continue my education and the daily victories that come with seeing students thrive. I hope that as they make their way through these same educational and professional spaces, they will see themselves as the embodiment of a more diverse and culturally relevant community.

I used to think that I became a design educator in spite of my complicated relationship with design. In hindsight, however, it may be more accurate to say that I moved into education precisely because of the challenges I faced.

I was not naturally inclined to get into teaching, but being in the classroom led me to think more deeply about my experience/perspectives about space and identity within a larger design context.

I had easily defaulted to my views and my stories. Over time, however, seeing relatively few students of color in my classes presented some obvious and difficult truths.

Ongoing frustrations and grievances aside, I have come to see how at home I am within the space of design and design culture. The same cannot necessarily be said for students who do not have the same reference points, experiences, or connections to European influences/culture/heritage. Again, Harris captures this sentiment so well:

[The Black students] often exhibit insecurities that negatively affect their performance. In fact, they experience a problem common to many Black design professionals: the feeling that they are not completely welcome in the profession” (269).

As evidenced by the Design Census Surveys conducted in 2017 and 2019, we know that the field has become more diverse in the 20+ years since Harris’ essay was published—and still, these systemic issues persist.

According to AIGA’s 2019 Design Census, 71% of American designers are white.

One might even describe the problem as a chicken and egg scenario, in which a profession that has had little diversity struggles to attract students of color precisely because of the lack of diverse representation. Moreover, whether openly acknowledged or not, students of color who chose to study design are expected to adopt a culture and history that may be removed from who they are and what they know.

Yes, education is primarily about acquiring new knowledge and moving outside of one’s comfort zone; however, without the counterbalance of also emphasizing the important contributions of designers of color, students receive the message that the design world is not a culturally-inclusive place.

Creating the future of an inclusive design culture

Just as my focus on diversity and design has broadened beyond my personal experiences to encompass the experiences of my students, I have spent more time thinking about what I owe them and what they can, or should, expect from me.

Is my role to provide them with the same Swiss Style bonafides that I received, or to push back against the prevailing European-based design cannon? Or, more importantly, how do I help create space for students who may generally feel like outsiders?

The majority of my teaching experience—over a decade now—has mostly been working with white students who come from middle- to upper-class families. I took it for granted that these students already had many of the soft skills and connections, in addition to access to a good education, to them get to wherever they needed or wanted to go. They constantly saw themselves, their history, their culture, their heritage represented in the design world. All of the signals they received served as an affirmation of their chosen career paths.

Now, I teach at an urban institution with a more diverse range of students—from socio-economic status to age, gender identity, and racial/ethnic background—within a diverse city. It is subsequently much easier to see how a traditional, European-based design curriculum, to say nothing of the design stars that the industry lifts, doesn’t necessarily include or represent them.

My design education, as well as ethnic and racial backgrounds (including European/Mennonite roots) and having grown up in a primarily white town, made it easy for me to appreciate and see the value of the Swiss Style. At the same time, I had to take the initiative to try and learn about the Black design world, of which I was completely ignorant.

Finding a sense of community and purpose is difficult when you don’t know where you came from; knowing who you’re connected to shapes your identity. Harris addresses this dilemma as well, noting that educators (and historians) must “teach in a way that addresses the unique cultural experience of all our students” (270).

Pushing a diverse and inclusive educational agenda is not simply about making students of color feel valued. Design students across the board must take some ownership, learning to see the diversity that exists within our profession as part of their design identity, part of their design history, and part of their design culture. It is up to us as educators to lead the charge, raising up the work of designers from traditionally marginalized or underrepresented communities to shape a design history and culture that is relevant for the 21st century and beyond.