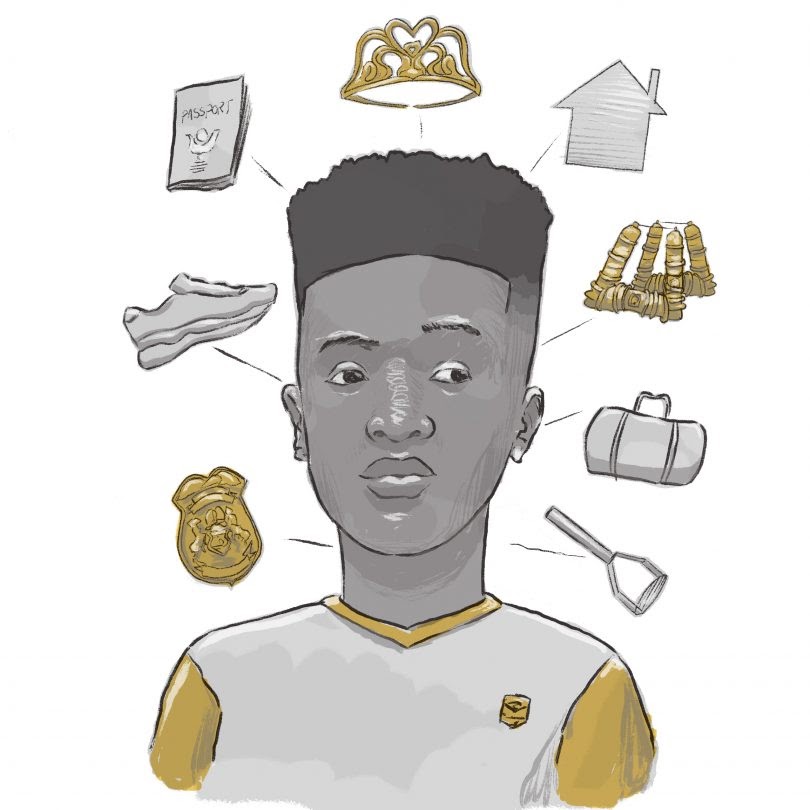 In Detroit, I am seen as the “other:” a Black queer femme writer and designer in a region that understands Easter hams, factory lines, and pseudo-Puritanism cloaked in Motown sounds. When we attempt to answer the question, What is Design, often the idea in the popular imagination might be to make an object or tool visually appealing, or pretty, rather than merely functional. Within Black life and culture, however, necessity often outweighs ordinary or mainstream use.

The popular imagination must play catch up if we are to design for centering Black humanity. Google’s Reena Merchant goes a step farther to say that design has evolved into a space where public perception and ease of use has become a brand’s responsibility, not merely a marketing opportunity. What if we considered designing for the safety and lifestyles of Black people a crucial step in consumer strategy?

Recently, I was introduced to Neurospeculative Afro-Feminism, a concept developed by Ashley Baccus-Clark, in product design and application. NASF design is centered around protecting the Black body proactively—rather than passively.

What does it mean to design products for Black advocacy, rather than confirmation of white spectatorship? Baccus-Clark’s studio has offered creative Afrocentric solutions for keeping Black people safe, by suggesting that body cameras can be embedded in the doorknocker earrings popular with some Black/womxn of color, and fabric patterns intended to thwart facial recognition technology can be interwoven into our scarves.

Because cell phones and more traditional cameras are no longer a neutral tool in the hands of the oppressed: our camera equipment simply isn’t reserved for family vacations or even everyday socializing. We must respond to the reality that the wider imagination hasn’t sufficiently considered the needs of the Black body in a moment of turmoil. We are ever on guard, always living in a state of tension and vigilance.

Our clothing and devices should reflect the command to Keep our hands where they can see them in a moment of crisis. This is the stuff of conceptual opportunity.

Imagine a world where Black skin was a consideration. What if sunscreen wasn’t creamy white straight out of the bottle, and naturally included a dash of cocoa butter? Skin cancer is often discovered in more melanated skin tones at later, and potentially more fatal, stages. While Black people aren’t as susceptible automatically, the incorrect and prevalent attitude that skin cancer doesn’t happen in Blacks—even amongst medical professionals—can be considered a form of persistent neglect by wider society.

When we permit the Black body to acknowledge the violence or ignorance often threatened against it, we deny the mainstream gaslighting that usually promotes police violence or medical abuse as random experiences, rather than family stories that get retold or hushed generation after generation.

As Black people with unique needs, we have a responsibility to ourselves to take up space. We can demand design concerning Black hunger, thirst, fear, courage, dreams, words, and faith. If a Black chef is cooking, do her kitchen tools and cutlery reflect the preparation of foods she’s preparing or does she have to make do? Is her masher best for yams, or only what’s available for potatoes?

When we acknowledge her need for accurate tools, we create the option to build adequate tools.

Conversely, let’s also consider substance abuse rates and thirst in Black homes. Why are so many cups and glasses designed for liquor or, depending upon your region, codeine abuse? While red SOLO cups are great for lemonade, and white styrofoam cups nifty for icees, let’s also acknowledge the cultural imagination tied to sipping slow death.

How do we lure the next generations’ eyes away from the temptations of these glasses and into a book or onto canvas instead? Do we build taller tables, or do we encourage less problematic drinking?

How do we design for Black futures, and not merely around Black history? Find joy in designing for Black protest with bulletproof placards, or Black debutantes should have the option to pick out a dress with an expansive range of patterns that reflect our African heritage.

Design for Black pregnancies by showcasing alternative birthing and doula roles in mainstream media. Black travel is almost entirely ignored though, despite centuries of economic privatism and denial, Blacks do indeed save up and see the world.

If a Black woman is traveling alone, have we considered her unique self-care needs while exploring life outside of the White American Gaze? Consider a travel kit with all of her spiritual and social tools easily in reach if she needs to decompress in a Berlin hotel room. If she’s a spiritualist, does her overnight bag have a compartment that can house a set of crystals? If she’s a Christian, does her travel bible reflect multiple skin tones?

Expand our visual palettes to match our wandering tongues. We talk about everywhere we’ve been, who we saw, and what we did. Let’s recover from the secrecy that envelops so much of the tones of Black life and consider phone apps that support Black American or British vernacular English. So much of Black life remains under wraps because we are used to our ideas, styles, and sounds being stolen by popular culture with little acknowledgment or recourse.

Design around, and with, the pain. Design for Black mental health, financial rehabilitation, and the integrity of Black homes. Can we see a line of clothing or bedding with weighted material that might naturally hug the Black man or comfort the Black child? Let’s develop bank accounts which take into consideration habits related to decades or centuries of ingrained cultural trauma and external privation and exclusion from resources. Let’s see front doors or household cleaning products that take into consideration how tough it is to get police footprints off of light-colored paint.

A fellow Black femme writer and filmmaker suggested that a wall of sneakers at home could be both an art collection and a down payment on the kids’ schooling. Make room for creative financing.

Where do we rest our things and treasured objects? How does a Black someone balance practical minimalism and tactical hoarding without ignoring the gap between intergenerational wealth and perception? I understand grandpa’s VHS collection may not mean much to many, but Harlem Nights isn’t the same when you stream it online.

The historical context of design

Moreso than in other places, designing in Detroit requires understanding Black labor history, past expectations, and the political interests and intents behind gentrification and repopulating the inner city.

Historically, so-called slum clearance destroyed huge swaths of primarily Black real estate, rental properties, and especially businesses throughout pre-1967 rebellion Detroit. After white flight emptied the city of racially diverse homeowners, a large Black middle-class filled the gap and supported the tax base. Yet, this has been reversed significantly throughout the 2000s as Black citizens have been opting for ostensibly safer neighborhoods in the surrounding suburbs while still psychologically tied to the wider cultural outcomes for their old dwellings and neighborhoods. It could be easy to expect a repeat of old disappointments, be they urban renewal or busing, depopulation or deindustrialization.

It’s not all a bad story, though. Even though our region is still dominated by the auto industry, we are slowly designing expanded transit. Even though Black homeownership has been decimated by tax foreclosures in a very flawed assessment and abatement system, we are inviting ourselves to make our bodies home for the first time in American history.

Depictions of Black self-care and celebrations of our cuisine are exploding in popularity on social media and expanding in mainstream coverage. Media entities such a Black Girl in Om, a self-care platform founded by Lauren Nash, and the promotion of Black queer femme food artisans like Kia Cooks, former head of the New York City-based restaurant Lalito, are ensuring representation. Whether they tear down the house or not, they can’t bulldoze all of us.

Timing is everything. We are Black designers and artists born into an era unrestricted by traditional mass media and economic crises. We can create our own news streams on social media. We write and produce our own web and television series full of Black and brown folks living and even dying with all of the expression and challenges in between. We have chosen to embrace the tools available to us in this day to repurpose Blackness, so-called coolness, and harness our power to influence. We are set apart in our generation.

I am not the Black woman or wife society expected to find when my mom was in her 20s. I am not looking for the sort of guy my dad was encouraged or socialized to be in the same era. We won’t give another inch in modern life because we have chosen to reclaim our time, our beliefs, and our blood. We give one another space to grieve and make it possible to heal to create again.